It was the day we would encounter Bedrock Rapid, a class 7. Bedrock Rapid is not traditionally considered one of the major rapids that oarsmen are super concerned about. It’s no Crystal or Lava Falls. Frankly, if you hit your line and make it down the right-hand side of the rock. Bedrock is easy enough that it can be considered a class 3.

During GC2015 I had a nasty swim down the left-hand run of Bedrock Rapid. The left-hand run is, most certainly, not recommended. There are some bad holes, a strong eddy you do not want to get stuck in, and a spot against the rock that if you get stuck against almost always results in a flipped raft.

I was more scared of Bedrock Rapid than any other rapid of the trip.

It’s interesting how our experience and perceptions can cause such irrational fears– there are definitely worse rapids, with worse consequences than Bedrock Rapid.

We stood on shore near Bedrock Rapid eating lunch, scouting, and watching another group run the rapid.

I felt like crying, but I knew I had to do this. For no one else but me.

Well, we made it! A huge relief washed over me. Fuck you, Bedrock Rapid. 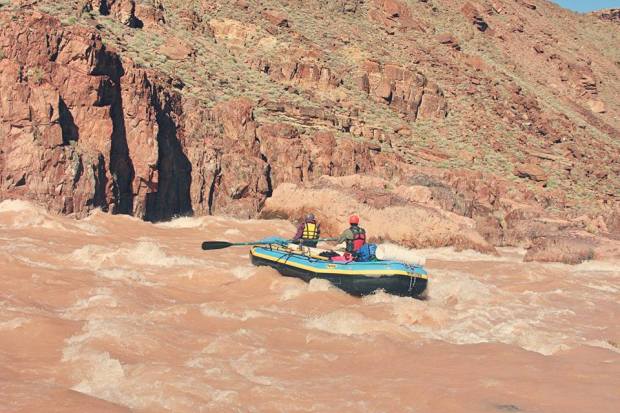 Sailing Past the Right-Hand Side of Bedrock 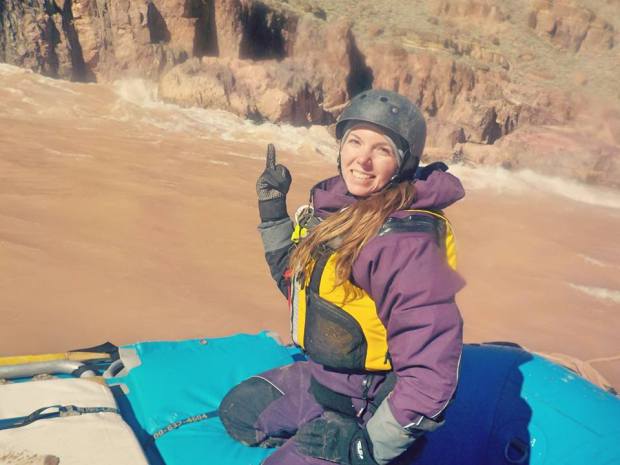 The Grand Canyon has become such a special place to Nick and I. he proposed during GC2015. Between the two trips we have been pushed outside our comfort zone. we have been challenged, we have learned, and we have grown together.

When JB asked us what we wanted as a wedding gift– of course it was going to be Grand Canyon related [We are the weirdos who paid $400 and purchased the oars we used during GC2015 as a souvenir. Just ask us how we got those back to MD!]. I wanted water from the left run at Bedrock Rapid. A much more meaningful and unique gift than the traditional Kitchen Aid Mixer on most wedding registries. I think* he was able to snag some! But I guess we’ll find out for sure in just a few short weeks.

After getting through Bedrock Rapid I felt a sense of ease on the river. We still had Deubendorff Rapid, a class 7, to get through that day. We actually stopped to scout. The rapid was worse than we remembered from GC2015. Pretty early on we hit a lateral at a weird angle and got spun around backwards. NBD, as the boats have two front ends! I turned around to help guide Nick through. It was an interesting experience, but we made it through no problem.

View of Deubendorff Rapid from the Scout 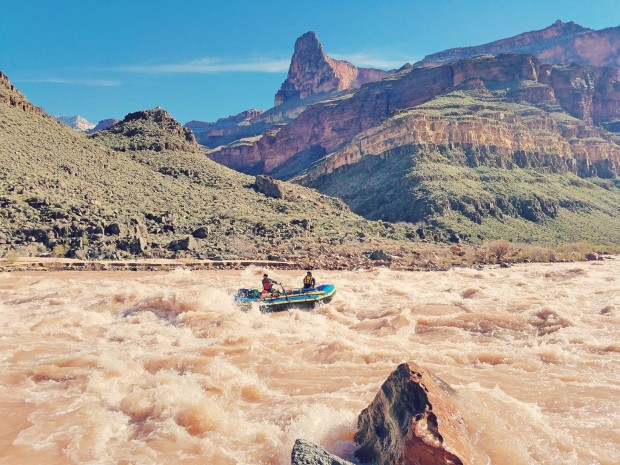 Oh, You Know. Just Rowing Backwards Through a Class 7.

Scouting Out the Trail for Our River Day 15 Adventure

*UPDATE* Of course JB came through! He snagged us a bottle of Grand Canyon water from the left run at Bedrock Rapid. Being the classy guy that he is, he delivered it [all the way from California!] in this beautiful decorative globe.