River Day 8 was an anticipated day for the team– it was the first of three back-to-back BIG rapid days. And, surprise, surprise— it was raining AGAIN.

We encountered our first class 8 rapid of the trip, Hance Rapid, just over a mile from camp.

Hance is considered one of the more technical rapids in the Grand Canyon, and it’s a biggie. It is definitely one of the rapids that you scout. 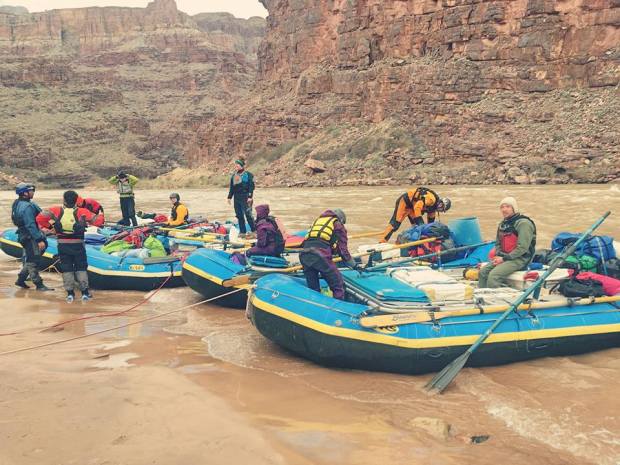 Helmets On, Rigged to Flip

I was nervous about Hance Rapid, but going into GC2017, it wasn’t one of the rapids I was obsessing over. Maybe I should have been obsessing over it.

I don’t know if it was the difference in water level from our Hance Rapid run during GC2015, but from the scouting location, Hance looked nasty. I couldn’t see a clear line. Large rocks constrict the river channel forming powerful hydraulics [holes, laterals].

I listened to Nick while he discussed potential lines with the other boat captains, then I had him do a rundown of his planned line with me. I wanted [needed??] to know what to expect, what his markers were, and how I could help him find his markers. All he kept talking about was the first two obstacles– completely ignoring the mess that comprises the rest of the rapid.

Nick– “We can just bust through those.”
AK– “Those holes and laterals are way bigger than you think from way up here..”

Welp. We had a bad line. Maybe even an awful line. We somehow just had luck on our side. Turns out that, yes– you can bust through those holes and laterals, but it was most certainly not pretty.

Crashing Through a Lateral
Where’d AK Go? Oh, She Must Be Under All That Water.

If You Look Really Close You Can Just Make Out the White Buckets. Yep, We’re Basically Being Swallowed Up by that Lateral that Crashed on Us.

Looking Tiny in the Bottom of the Trough 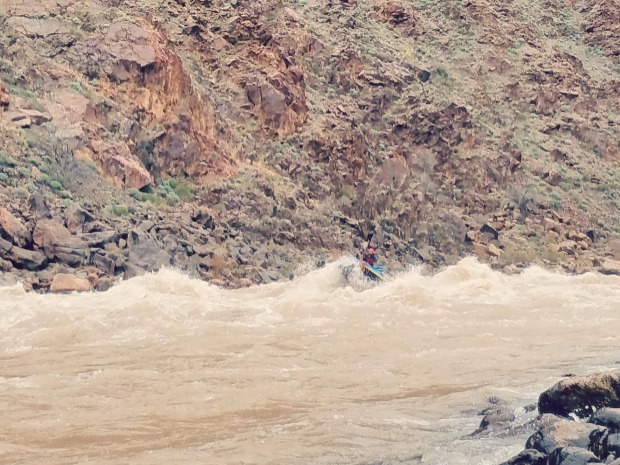 Still in the Boat. But Barely. 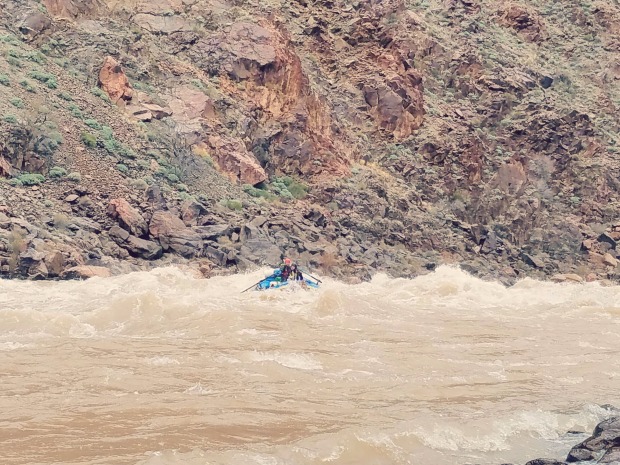 Huh. I Guess Those Laterals Were Bigger Than “We” Thought.

JB’s reaction to the GoPro video of our Hance Rapid run– “Oh. You took a different line.” Emphasis on different.

“A few times I thought, for sure, I’d be tossed out.”
-AK’s River Journal

I think Nick felt a tad bit bad about the whole thing. It seemed like he was much more cautious for the remainder of the trip when it came to big rapids.

Sockdolager Rapid, a class 7, had some big waves but we had an excellent line. And we pretty much had a dry line at Grapevine Rapid, another class 7.

We had a cold and rainy lunch at Clear Creek. Most of the group went for a hike after lunch. Nick and I started out with them, but it was still raining and the black Vishnu Schist was very slippery. The hike required scrambling up and over a few things– NBD in dry weather, but I really didn’t want to rip my drysuit [and I’m clumsy]. Instead of standing around in the rain getting colder and colder while we waited for everyone, Nick led some calisthenics! We looked ridiculous, but it was actually really fun. We laughed at ourselves quite and bit and we stayed warm #winning!

Camp was supposed to be Upper Cremation Camp, but we were surprised with how small the campsite was, so we spread out among Upper and Lower Cremation. Made for a bit of a hike to the kitchen, parawing, groover, and boats– but it was a much more comfortable arrangement for everyone.

Oh yeah, it rained and sleeted all night. We chose hanging out under the dry parawing as opposed to standing around a warm camp fire and being wet. Choose your battles, I guess. 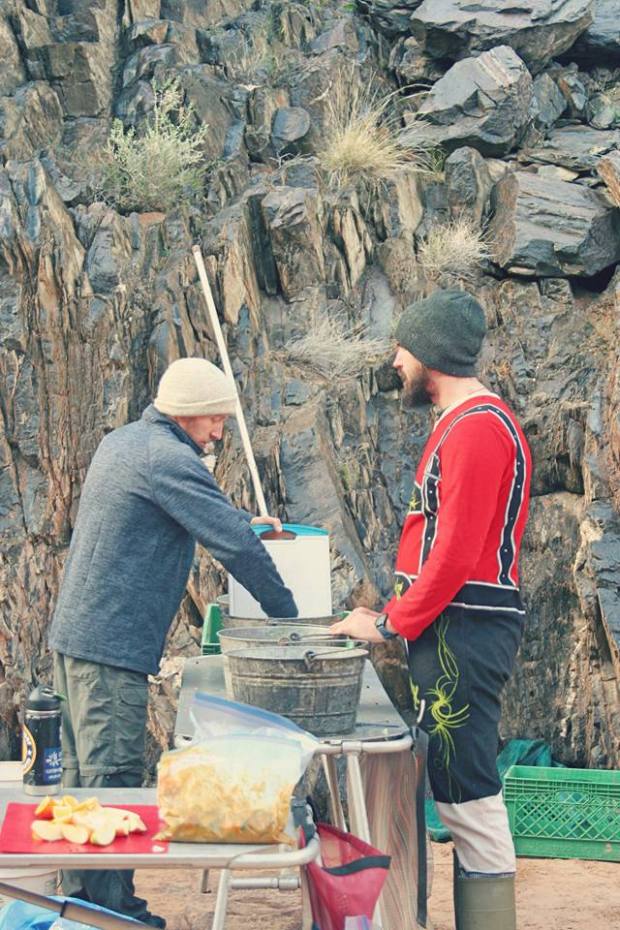 “..Really, really cold and wet. So much rain and sleet.”
-AK’s River Journal