Cars and bicycles. Not exactly the best of friends. I have ranted about this topic so many times on social media the past two years. I promise– today will not be a rant 🙂
So what got me started this time?
The husband of a woman that Nick and I sort of know from the gym was hit by a car while riding his bicycle on the 4th of July. It was the middle of the afternoon (I think she said around 4pm). The driver was drunk. Thankfully the husband is alive, but he was hurt very badly– like months before he will walk again, don’t know if he’ll ever ride a bicycle ever again kind of hurt.
The kicker– he was riding in an area where the shoulders are.. no kidding.. at least 12 feet wide. Where Nick and I ride regularly.
My heart hurts for this woman and her husband. And it majorly freaks me out that this happened in what would appear to be a relatively safe area to ride.
I don’t know what it’s like where you live– but in Southern Maryland, the cars are aggressive to cyclists. We have experienced multiple instances of people trying to run us off the road and people throwing things out the window at us. We’ve called the cops and the most frustrating part is they won’t do anything– “What do you expect us to do?” has been the response every.single.time. Um, maybe your job.
People in cars also tend to drive crazy around here. Unfortunately this is frowned upon, but I have had a few experiences driving behind someone who was weaving in and out of the shoulder, and I’ve wanted to follow them to their destination and ask if they realized what they were doing and that they could easily kill someone.
I won’t go into the details here, but feel free to ask me about the time I did confront someone 🙂 It was relatively exciting and I think I freaked them out for the rest of the day.
Ok, I promised no ranting so let’s dive into  some bicycle safety!.
The National Highway Transportation Safety Administration has a lot of good information on bicycle safety. Bicycle Safe is another great resource for common ways people can get hit on a bicycle and how to avoid them.
Bike League’s “Rules of the Road” are a great starting place for bicycle safety.

First and Foremost– Follow the Law!
Even as as avid cyclist, there’s nothing more frustrating when you are in a car than seeing a cyclist run red lights and stop signs.
Your safety depends on you following the law. Yes, you have the same rights as drivers. But with those rights, come the same duties. Obey traffic signs, ride with traffic, etc.
Be Predictable
Make your intentions clear. Ride in a straight line and don’t swerve in and out of parked cars. Always signal when turning. Check behind you before turning and when switching lanes. Make eye contact with the driver. Sometimes it is safest (or necessary) to join traffic. When you join traffic, it is good practice to take the lane so drivers see you and you make your presence known.
Be Conspicuous
Ride where you can be seen. Wear bright colors. Use flashing lights and reflectors– even when the sun in out. Wave (in a friendly way!) or nod to drivers. This ensures the motorists see you and helps you assert your place on the road.
Think Ahead
Always assume that people are not paying attention or that they do not see you. Anticipate what drivers (and even pedestrians and other cyclists) will do next. Watch for turning vehicles and cars pulling out. Ride outside the door zone of parked cars.
Ride Ready
Check your tires, brakes, and chain before riding. Carry necessary tools and supplies on your ride. Always wear a helmet. 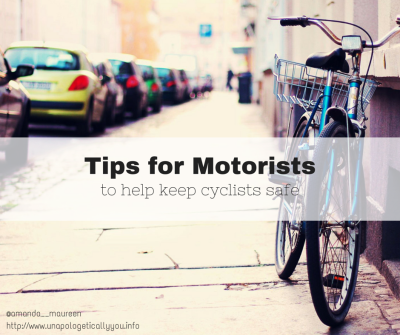 Different But Equal
In all states, cyclists are deemed by law to ride on the road and are entitled to the same rights as motorists. Expect cyclists on the road and watch for them. Treat cyclists as a slow moving vehicle.
Practice Patience
Wait until it’s safe to pass a bicycle. Give cyclists the right of way when the situation calls for it. Allow extra time for cyclists to go through intersections. Recognize road hazards that may be dangerous for cyclists and give them the necessary space to deal with the hazard. Never engage in conduct that will endanger a cyclist. Do not harass cyclists. Be tolerant, understanding, and careful.
Passing and Turning
Do not pass a cyclist until you can do so safely. Allow ample space between you and the bicycle when passing. In Maryland, law requires a minimum of 3 ft between motorists and cyclists riding in the road.
Watch for cyclists when you are turning right. A cyclists may be planning to go straight through the intersection. Do not speed ahead of the bicycle to attempt turning in front of them. The cyclists may be going faster than you anticipate and crash right into your car. Also look for cyclists when making left-hand turns.
Egress Etiquette
After parallel parking, make sure there are no cyclists riding along side your car or fast approaching. A driver can spot an approaching cyclist; however, a cyclists cannot anticipate when a driver will open a car door.
Honking
Do not honk unnecessarily at cyclists. If you do need to honk to alert a cyclist, do so at a respectable distance. If you are too close, the noise might startle the cyclist and can create a hazardous situation for both of you.
My hope is that after reading this, whether you are a cyclist, motorist, or both, that you approach the road differently. Share the road. Respect everyone who uses it. Unless you are a really messed up person– you don’t want to be responsible for ending (or severely altering) someone’s life because you were being careless or stupid on the road.
Cycling is great for the environment, great for your body, great for traffic congestion. Let’s keep this activity safe for everyone.
————————————————————————————————————————
Your Turn! What tips would give you cyclists and motorists for sharing the road? How do you stay safe when you’re out cycling?
————————————————————————————————————————
♥AK


I’m linking up with Amanda at Running with Spoons— Check her out.