Today I have another special guest post for you 🙂 Nick is sharing his experience at the Catoctin 50K this past Saturday. This is Nick’s 4th time running Catoctin. The first was with me in 2012, where I DNFed. That might be a story for another day!
In my heart I want to be an ultra runner so reading this story gets me so pumped up.
Enjoy!
————————————————————————
The Catoctin 50K has been held every year since 1999 in the July-August time frame at Gambrill and Cunningham state parks near Frederick MD.  I have run this race the last 4 years, and can’t wait for next year!  I use this race (and others) as a measuring stick to make sure that even as I age, I can still punish myself for 6+ hours, sprint a 5K, and/or have the right mental state to not give up effort.

T-Shirts Are Now Included in the Registration Cost!

Going into this race, I had a few goals:

Set a new personal best (made it!)
Help another runner (loosely, yes)
Clean up trash on the course (No need!  Ultra Runners are super respectful.)
Stay upright (no knee, elbow, forearm, or hip hit the ground!)
Prep for this race really started a few months prior.  We have been rigorously training for the Pikes Peak Ascent and have been including A LOT of hills into our weekly workouts.  Down in Southern Maryland, we have limited terrain to practice hills, so we have been driving to the turnaround at this course to conquer the worst climb…up to 4x in a session.  We have also been at the gym with the treadmill at 10-12% incline, often eating and drinking during the workout.

Catoctin 50K Elevation Profile
The day before the race I had a healthy dose of Chipotle, followed by a spaghetti dinner (not by choice, we were out of food at the house).  I went to bed around 2030 with plans to wake at 0400.  I had all my gear packed and was planning to run with a ~1 gallon CamelBak and a bunch of Cliff Bars.
The drive to the park on Saturday morning was fairly uneventful, and I was EXTREMELY excited to see that it was raining–A LOT.  The morning was fairly cool and there was a bit of cloud cover.  This was shaping up to be a perfect day!
Kevin Sayers, race director, does a great job setting the mood for the ultra:
“Listen…I don’t want to hear it.  Some of you are going to come back and tell me your GPS watch said 34 or 36 miles.  I’m just not going to listen to complaining this year.”
And, especially true to me this year, Kevin talks on the website about the trail:
“Getting lost is always possible but let’s hope for the best. Sixty percent of the runners get off course at least once. This course will penalize any runner who runs “heads down””
The start is always uneventful–all entrants were standing in a circle listening to the pre-race brief, then suddenly, Kevin yelled, “1-2-3 GO!” and we were OFF!
The race starts with a ~½ mile loop around the parking lot to spread out runners prior to the single track trail.  As a front runner (who usually gets passed later in the Ultras!), I entered the woods ~10th place.  The first 6 miles (aid station #1) include two fairly large hills of ~400 ft and ~700 ft.  I really enjoy the first section of the trail as I still have enough energy to bounce around on the rocks and comfortably run on the downhills.  There were a few sections of the course where there was absolutely nothing to be gained by running–the hills were VERY steep and the rocks were challenging.  I picked off a few people here and there, and entered the next aid station ~7th place.  With all the hill training we have been doing, I was KILLING IT on the uphills.
In comparison to those ahead of me that I could see:
I gained ground on the uphills (~20% faster)
I maintained pace on the flats
I LOST ground on the downhills (~20% slower.  Towards the end of the race this becomes ~40% slower)
The aid stations were all stocked with relatively the same food:
Watermelon (I had 1-2 slices every station)
Bananas (skipped those)
PB&J (about half a sandwich every station)
Water/Gatorade (filled as necessary to always have at least ⅓ of my CamelBak filled)
PEROGIES!!! (these were soooooo good)
Grilled Cheese (skipped those)
After the first aid station (I stopped a little longer than the leaders), I noticed that I was probably somewhere halfway between the leaders and “the rest”.  I was hypersensitive to my footing as the rocks were a little slick, and I’m not the most technical runner.  As a result, I was looking ~10-20 ft ahead of me most of the time, with a few quick glances up the trail to see those ahead.  At all the intersections, I stopped and dumbly looked around for the blue markings.  Unfortunately, at one intersection (I should have gone right followed by a quick left) I went straight.  The trail was beautiful, although I didn’t recognize it from previous years.  I merrily ran for ~8-10 minutes before I started getting this weird feeling.  “HELLO!!!” I yelled hoping to get some reassurance that I was going the right way.  I ran a little more…”HELLO!!!” I yelled again.  Then it dawned on me…I was coming up on a person’s backyard that was definitely NOT on the correct route.
Frustrated, I turned around and started a timer (equates to distance) in case I got lost again.  For TWELVE MINUTES I was running until I got back to the intersection.  I briefly waited until the next runner came and he assured me of the correct direction.
The aid station at mile 9 through the “unofficial” aid station at the top of the turnaround hill were fairly uneventful.  The route was 90% runnable and I was keeping a comfortable pace, even gaining back a few of the places I lost.  The trail had a few small sections of large rocks where I walked, and a few steep climbs.  For the most part, I was able to keep a steady rhythm.  Upon reaching the “unofficial” aid station at the top of the BIG hill, I was elated to realize that this route was familiar!  This was the same ~2 miles we had run so many times in training.  What a relief to know I wasn’t going to get LOST!
Even though the turnaround is a ~1100 ft descent followed by a ~1100 ft ascent, it was great to be familiar with the route.  Coming down the big hill, I saw some of the lead runners (and ALL the people who past me while I was off in LA-LA land) coming up the hill.  The leaders were probably ~2 miles ahead of me and 30-40 minutes.
At the bottom of the hill by the turnaround, there is a stream that fluctuates wildly in strength with the rains.  Today, it was fairly swift!  When running, I HATE running with wet feet.  I’ll go a quarter mile out of my way to avoid getting my feet wet.  Knowing this route intimately from our training, I headed to our crossing point and began my performance of jumping, getting on all fours, and balancing while trying to stay dry.  Even with all my effort, I slipped in.
That’s Me at ~1:45!!! 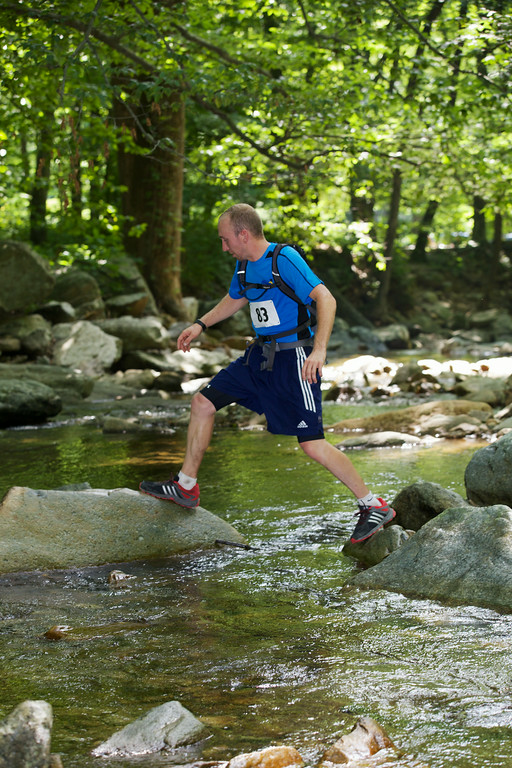 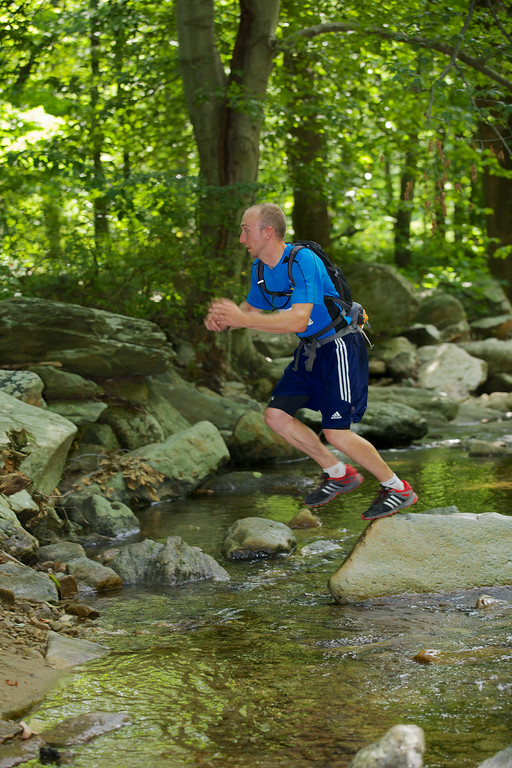 Returning up the hill, I planned to walk specific sections, while saving my energy for the more runnable flats and shallow inclines.  Even with this strategy, I caught a few more people.  It was at this point, a man named Saul (BTW, he is 55) and I started running together.  We each exchanged stories about our strengths (hills & flats) and weaknesses (downhills) and our fear of people catching us later on.  Last year, I was fighting the last 6 miles against Kari who killed me on every downhill.  Saul warned that his very technical and strong friend would probably be catching us towards the end.  We pushed each other, and both acknowledged how nice it was to have someone to encourage us, real-time, throughout the hills.

Saul and I stayed within 1-2 minutes of each other for the whole rest of the race.  We caught a few additional people, and were passed by only one.  Surprisingly, we ran almost the entire course from the top of the BIG hill, to the final aid station.

Near the 6 miles remaining aid station, John (1) smoked me on the downhills and I couldn’t gain enough on him on the uphills to keep from losing him–he was the only one who caught us.

Additionally, I passed another gentleman, John (2), who seemed to be struggling.

Me:  How you doing, you good on water?
John (2):  I’m set on water…its just my ankle….Did you run this two years ago?
Me:  Yes….why?
John (2):  Nick!  Its me, John.  You helped me out two years ago with water when I was sitting on the side of the trail!
Well how about that!  With my limited experiences in Ultras (5x), I have learned that the extra weight from ~5 lb of water is well worth it.  BRING WAY MORE THAN YOU THINK!  It has happened the past two years that I have filled someone’s water on the last 6 mile stretch.  Its going to take ~1.5 hr, it’s going to be hot, you’re tired…BRING MORE WATER!
Saul and I kept clicking away the final miles and excelled on the final steep climb to the finish.  The last 6 miles has two decent climbs, with the most annoying ascent ~½ mile from the finish. The final climb is STEEP, and it includes annoyingly spaced telephone poles to help with erosion on the trail. I tried to maintain pace (I probably had my hands on my knees at one point), but managed to kick it in the last minute to the finish line!  My time was 6:34:05, and was ~ 3 min faster than my best!!!  I got the coveted handshake from Kevin, and the laminated Cat Card.

The post-race meal was, as always, delicious!  I chatted with a few of the runners about good training areas near DC (Maryland Heights) and upcoming races in the area.  The drive home was tiring, and I slept WELL that night.  As I write this two days later, I’m still slow going up and down the stairs  🙂  I hope to be back next year!
————————————————————————
Doesn’t that make you want to get out on the trail? From my limited experience at ultras with Nick, I have decided that ultra runners are the coolest people. Well, trail runners in general are pretty cool 🙂
Your turn! Have you ever run an ultra? Do you have goals to complete one in the future? What’s the longest distance you’ve ever run?
♥AK
If you are digging the vibes here at Unapologetically You, I’d love for you to sign up for the monthly newsletter!
Subscribe to our Newsletter!