I knew I would be home that weekend for my BFF’s bridal shower so my mom and I signed up. This would be my mom’s second 5K. We signed up to be part of Team Lisa, a friend of my mom and aunt, who is currently in breast cancer remission.
My mom planned to walk the race. I planned to run, and then head back out on the course to finish it up with her. The night before the race we were able to convince my dad to come too.
The first thing we noticed when we arrived at the Selinsgrove High School was the number of people. My last half marathon didn’t have this many participants! I don’t know the official numbers, but prior to the race I saw they were expecting 3,000+ runners/walkers. The official timing page has 1,052 timed runners. Wow, that’s a lot of people out supporting a great cause! 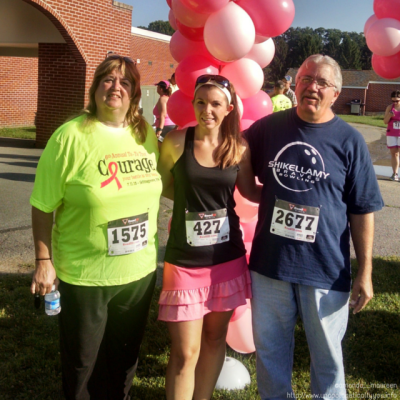 As we walked to the registration booth we were surrounded by a sea of pink and neon yellow (the official race shirt). Tutus and crazy outfits were everywhere. Of course I wore my pink Vixen Skirt from Skirt Sports. What else would I wear to a Ta-Ta Trot??
We followed the massive crowd to the start line area and tried to find a good place to line up. I hung out with my parents for a few minutes before heading up towards the front. I really wanted to do well, and didn’t want to get stuck fighting the crowd. The race had a pretty uneventful start at 8:30 am. Some people didn’t even realize the race had begun! The course started right up hill. And my first thought was “Crap, I hope my mom does ok.” She was really concerned about hills and her breathing.  After maybe half a mile or so, there was a nice long gradual downhill. I love those. Thanks to that downhill I was able to rock out an 8:10 min/mile! Woot woot, someone was speedy 😉
The course was a loop with slight “rolling hills”. Each mile was marked by a large pink sign (kind of cool!) and there was a water stop at the halfway point. The roads were completely closed and there were plenty of volunteers, EMS, and police support on the course keeping any traffic at bay. Gotta love the dedication of volunteers. They really make these sort of races possible. There were surprisingly a lot of people sitting out on their lawns watching the runners. One man had his sprinkler out (it was a pretty warm morning) for runners to go through and another woman had a huge squirt gun to get runner wet.
I waved at some random spectators, told the sprinkler guy that he was awesome, and gave a “woot woot” to the squirt gun women. As one woman ran past me she shouted, “Love your skirt!” That put a smile on my face as I quickly shouted back “Skirt Sports! Check them out online.” I saw my aunt and uncle at their traffic station as I neared last stretch.
I had chugged some water really quickly at the wate station and it was making me feel like throw-up (thankfully I didn’t!) but I kept moving pretty quickly. I saw my cousin pass me right before the 2nd mile marker– he was moving fast. The course ended on a fairly steep uphill (who does that??). I was feeling strong from all the hill training we’ve been doing to prep for Pike’s Peak, so really it was NBD. But still. It’s just unnecessary to do that to people. After you crested the hill, you turned into the stadium and ran about half a lap around the track to the finish shoot. I didn’t think I would beat my last 5K time, but I wanted to be comparable. Looking back I think I could have pushed myself a bit harder.
I finished in 0:26:37 with an average of 8:35 min/mile. Not too shabby.
I chatted with my cousin for a few minutes. Grabbed a bottle of water and a peach. Then headed back out on the course to find my parents. I stopped to chat with my aunt and uncle briefly on the way. When I found my parents they were looking pretty good. My mom claimed she was struggling, but she looked awesome. She also picked up a new friend.
This race was a big deal for my mom so I asked her to put some thoughts down on the race. Here’s what she gave me:
“Today, on Saturday July 11, 2015 I walked my 2nd 5K race. My first race was last year up in Corning, NY with my daughter. Amanda was very patient with me because I’m not a fast walker, but I did have a goal and she helped me achieve it. Today, my 2nd 5K was for the Ta-Ta Trot in Selinsgrove. Not only was Amanda there for me again, but my husband also was my support. I felt like this race was a little harder for me because there were more hills. But I did finish the race! Around the 2nd mile marker I heard a lady say ‘I quit, I can’t do this.’ I stopped walking, turned to her, and told her ‘Yes, you can do this.’ I told her my name, asked who she was, and said ‘Come on, we will finish it together.’ So the last mile we walked together. She couldn’t make it up the last hill but almost finished. I’m still proud of this woman. We saw her sitting with her daughter as we were leaving. I gave her a high five and that was the last I saw her. I’m very grateful for my husband and daughter. Maybe next year my other daughter can join us and we can do it as a family.”

As I neared the stadium with my parents I tore off to go around the back side to I could get a picture of them crossing the finish line. They did awesome and looked happy! I’m so proud of my mom for accomplishing her goal. It’s awesome to be able to do a fit and healthy activity with your parents.

Overall, this was a great 5K for a great cause. But to round out this race report I have some thoughts and feedback on the organization of the race that could make things better for next year.
1. This race has grown. It is HUGE. It needs to be treated that way. You’re no longer looking at a small hometown race. This is larger than several half marathons I’ve run.
2. There needs to be volunteers directing parking. It was a mess trying to find somewhere to park.
3. The race needs a more organized start. Consider a wave start. Marking spots along the start line for people to line up based on pace. Or at the very least have walkers start 5 minutes after the runners have cleared the area.
4. I finished pretty quickly and there was an assorted selection of food to include chips, bananas, apples, whole peaches, and whole plums. However, when my parents finished there were ONLY chips and bananas. This sort of crap drives me nuts at races. It occurs because of a few different things 1) greedy people taking more than they should 2) non-participants taking food (race organizers don’t account for this) or 3) Just not being prepared for the number of participants. The last person finishing paid just as much to do this race as did the first person, and should be able to enjoy the same post-race benefits.
Your turn! Did you race this weekend? Support or encourage someone to accomplish a goal? Or go on some other adventure?
♥AK
If you are digging the vibes here at Unapologetically You, I’d love for you to sign up for the monthly newsletter!
Subscribe to our Newsletter!