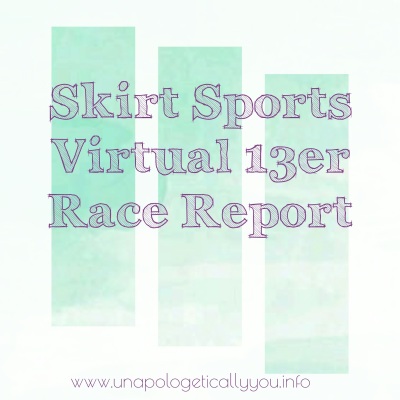 I am really excited to tell you about the Skirt Sports Virtual 13er. I came across this event by chance.  I will be honest, up until a few months ago, I didn’t know who Skirt Sports was. As a Sweat Pink Ambassador I received information about something called the #REALwomenmove Challenge. It looked like fun so I jumped right in. And when I say I jumped in, I completely immersed myself in the mission behind #REALwomenmove. Real women, real bodies, real motivation is their slogan. Wow. I could totally relate to that. Thinking about it now– it was almost fate-like that I found a company I could so fully relate to.
At the completion of the #REALwomenmove Challenge I found out that I was one of 5 winners!! You have no idea how ecstatic I was. I don’t consider myself “unlucky” but I also don’t normally win things either. I was on the top of the world for a few days. I won a free entry into the Skirt Sports 13er, $125 gift certificate to spend at the Skirt Sports shop, and an extra 25% off by being a Sweat Pink Ambassador. I pretty much hit the jackpot 🙂

that’s me and Sargey in the bottom right 🙂
I spent my gift card right away. And waited like a kid at Christmas for my package to come in the mail. I ordered the Vixen Skirt, Boulder Skirt, and Sanitas Pants. Everything I order fits perfectly, and I was so so so happy that the shorties under the skirts did not ride up. I’ve tried other skirt brands in the past and have been disappointed after even the shortest of runs. I’m a regular sized person. My thighs touch. These Skirt Sports skirts allowed me to run, and run far, with comfort the entire way.
Anyway, enough about how much I am in love with these skirts 😉 Back to the race!
On the days leading up to the 13er Skirt Sports hosted the 13 Days of 13er Instagram challenge. This challenge was so much fun! Look up #13daysof13er on Instagram to see how a group of awesome women celebrate running.
The week before the race I received a package in the mail from Skirt Sports filled with all sorts of race goodies. The finisher skirt looked so comfy that I wanted to wear it right away, but thought I should probably wait until I actually run the race.

finisher skirt, race bib, and note from Skirt Sports founder Nicole DeBoom
Running the Virtual 13er, you could do your race either Saturday or Sunday. I chose Saturday just because it fit into my schedule better.
There rules of the Virtual 13er were simple:
1. Map your course. Think about it beforehand. Plan a purposeful 13er.
2. Take a photo of your race outfit and post it!
3. Get ‘er done! 13er in the bag.
4. Eat cake. Laugh. Cry. Relax. Celebrate.
5. Put on that hard-earned finisher’s skirt and share with us!
One of the things I liked most about running a virtual race was that there wasn’t any pressure. If you’ve been following Unapologetically You for awhile, you know how frustrated I can get with people at races sometimes. This race was just me and Nick.
As I mentioned I decided to run the 13er on Saturday. The weather in Maryland had been hot and humid all.week.long. The weekend wasn’t predicted any differently. When it is 76 deg and 85% humidity at 5am when you wake up, there is no beating the heat.

pre-Virtual Race
The night before I planned out the route using Map My Run. The route I chose was a little longer than 13.1, because it was a loop, but my plan was to stop my watch at 13.1 then walk the rest of the way back. Also side note– Nick and I have started training for the Pike’s Peak Ascent. We’re doing a time based training instead of mileage based. Saturday’s long run called for 2 hr 45 min. After finishing the 13er we went straight to the gym, hoped on the treadmills, cranked up the incline and did a run/walk for another 30 minutes.
We arrived at our starting point at 6:30am. It was already hot. Nick snapped a quick photo of me, then we were off! The biggest hill of the run was at the start. I was glad to get that over with before the sun was beating down on me. The first 3 miles went pretty well. I was covered in sweat by the end of mile 1, but didn’t feel like death yet. I decided to do a 12 min run / 1 min walk for as long as I could.
Split Times for Miles 1 – 3
10:01
9:47
9:43
I was happy with those times, and thought that if I could sustain under a 10 min/mi pace throughout the run that would be awesome.
Between mile 3 and 4 on our route we passed a water fountain. We had a water/gatorade mix in the CamelBak, but I was already very thirsty for plain water. Plus I wanted to dump some on me to try to help cool my body down. The route that we were running had some shade, but there were also a lot of stretches with no reprieve from the sun.
The next several miles were pretty uneventful. We were chugging along at a slower pace than normal, but were able to remain steady. I kept up my 12 min run / 1 min walk until mile 8-ish when we stopped at another water fountain. I was starting to feel blah from the sun, heat, humidity. And my legs were feeling a bit heavy. I was able to dump some more water on myself to cool down.
Split Times for Miles 3 – 8
9:51
9:32
9:49
9:51
11:10
That last mile was where I stopped at the water fountain and decided to take a bit longer of a walk break. At this point I felt like I needed to back off on my run / walk plan. I was feeling “fuzzy” from the heat and my heart was racing trying to cool me down. Needless to say, I was uncomfortable. I did a few shorter run / walk intervals. I don’t even remember now exactly what they were. I was just focused on running in the shadiest areas I could find.
A few miles later we were coming up on the golf course. I saw this giant sprinkler watering the course. To lighten the mood I asked Nick if it was a mirage 🙂 Turns out it was real– hehe. As we got closer I decided I was taking a break to run through the sprinkler. I handed Nick my SPIbelt which had my phone in it and asked him to wait for me. It was so refreshing to stand under the sprinkler. I was soaked by the time I walked back to Nick, but I didn’t care. I was feeling slightly better.
The “slightly better” feeling lasted maybe a mile. The longer we were out, the hotter it got. The temperature climbed 10 deg while we were running and the air was stagnate.
There was one more hill on the route. I decided I was going to walk the hill. Normally I love hill running, but not in the conditions we were facing. At one point within the last 2 miles I stopped to walk and said to Nick that I didn’t think I could run anymore. He is the best motivator– he reminded me how strong I am, told me I was doing great, and encouraged me to keep going.
Split Times Miles 9 – 13
10:25
10:27
10:49
10:45
12:18 (the hill) 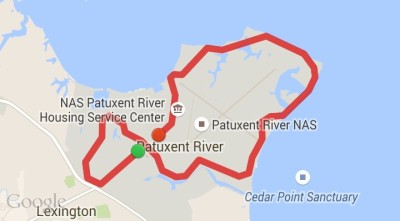 the route!
We finished in 2:15:21! It’s one of my slower half marathon times, but with the weather we had, I am happy with that time.
The Virtual 13er reminded me that I am strong and that my body is capable of pushing itself through undesirable circumstances. That I can do it despite the odds. And that my pace does not define me as a runner.
I also learned to be comfortable in my body. I ran in just a sassy little skirt and sports bra. I had people staring at me. I felt vulnerable. I know my tummy has a little pooch, and there’s stretchmarks from when I was heavier as a child. But I decided to own it. To love my imperfect body for what it is. 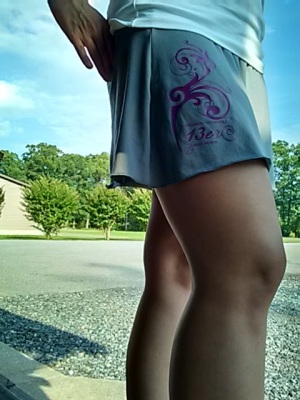 finisher skirt!
Did you race this weekend? If it’s hot where you’re at, how did you deal with the temperatures? Would you ever run “free” in just your sports bra?
♥AK
P.S. Skirt Sports is hosting the Virtual Boobie Run on September 12th! You can run an 8K or 8 miles. $60 entry includes a $70 Skirt Sports gift certificate to apply towards the bra of your choice, 10% bra discount, and FREE shipping.