Yesterday I did something new. I participated in my first organized bike event! You all know how much I’m into running– when Nick asked me to do the SMECO 75-mile bike ride with him, I was kind of iffy. I don’t own a road bike. I’ve never even been on a road bike. I have this cute little Fuji hybrid. Nick did a a great job of convincing me that we could do it on our non-road bikes– and that we would look pretty badass doing it. He does a lot of things I want to do, so I decided to do this for him.
Nick has been excited about the SMECO 75 since before we signed up. But once we were signed up and official we started adding long bike rides to our weekend lineup. Our longest training ride was 72-ish miles. I wanted to cry by the end because of how much my butt hurt. I was not eager to do more rides of that distance. But again, I wanted to be excited for Nick because this was something he really wanted to do.
The week leading up to the ride was stormy and raining every.single.day. The forecast was showing a chance of thunderstorms for Saturday as well. I tried not to think about the potential of riding through heavy rain.
Saturday morning we arrived at the SMECO headquarters in Hughesville, MD. There was already quite a few people bustling around. Excitement was is the air.
We went inside to check in and pick up our packets. I was impressed by the organization. Women on one side, men on the other. And tons of volunteers walking around answering questions. We received a drawstring race bag filled with a pretty snazzy shirt, a water bottle, and a few other promo items. 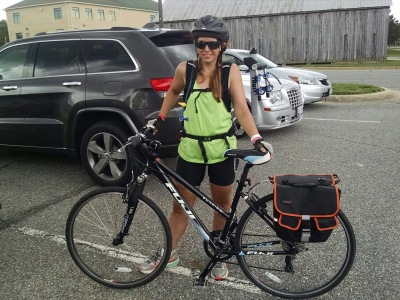 And just as we’re putting our bikes on the car it started to rain. We grabbed our finish line food– delicious subs, chips, cookies and drinks, then headed home. We weren’t even in the car 5 minutes when it started to downpour. We were soo lucky with the weather.
SMECO put on a truly top notch event. I was thoroughly impressed with the organization, the marking of the course, the rest stops, the food, the volunteers. This is definitely an event I will be returning to in the future.
So tell me– did anyone else experience any new adventures this weekend? I would love to hear about them 🙂 Feel free to leave me a comment!
♥AK 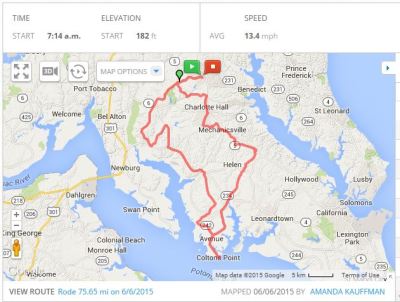